Yes Virginia, there really is a Savior.

“So get rid of all the filth and evil in your lives, and humbly accept the word God has planted in your hearts, for it has the power to save your souls. But don’t just listen to God’s word. You must do what it says. Otherwise, you are only fooling yourselves.”

“For if you listen to the word and don’t obey, it is like glancing at your face in a mirror. You see yourself, walk away, and forget what you look like. But if you look carefully into the perfect law that sets you free, and if you do what it says and don’t forget what you heard, then God will bless you for doing it.”

“If you claim to be religious but don’t control your tongue, you are fooling yourself, and your religion is worthless. Pure and genuine religion in the sight of God the Father means caring for orphans and widows in their distress and refusing to let the world corrupt you.” [James 1:21-27 (New Living Translation)]

Jesus, our Savior, uses supernatural power to save people from sin and change their lives. His death, burial, and resurrection paid the full legal price for everyone’s crimes against God. He saves true Christians from evil and turns them completely around empowering them to do good and right things. Christians do not just talk about justice and goodness but live out pure religion.

But it seems the modern Christian and churches are obsessed with the need to claim Christianity is not a religion, but a relationship. I know I have worn t-shirts with this weak argument in the past.  I’m sure this stems from the oppressive anti-God, anti-Christ and anti-Bible sentiment that drives the majority of Americans in this 21st century dark age. But honestly the lost still contend we are a religion, and for good reason.

In the past Americans demanded politicians to be Christian and they were careful to at least put on the mask of being a believer. Not today, recent polls prove the majority will resist and not vote for a Christian. So much for our founding fathers faith and principles they held when establishing this nation.

Today, the networks make sure they deny any connection to a Christian program aired on their network but gleefully broadcast anything with every sin in the book with their full support. Anything the Bible condemns they seem to support.

The consensus today seems to be that character does not matter in how a person governs in our nation. Really? You mean to tell me you want a leader to stand up before you on TV and lie through his teeth to get your vote, or to manipulate you and gain further control over you? What do they have to lose?

For instance, if you think that it is no problem for a politician to secretly cheat on their spouse, and hurt the person they claim to love, what do you think they will really do to you?

But wait, everyone has a sinful past, I am talking about persistent and continuous present lies and wicked behavior. Beware of the stone throwers who destroy first and seek out truth later because of past sinful mistakes like King David in the Bible. God led him to stop his evil and forgave him. This goes for all of our leaders today.

A true believer can’t do it! The Christian is commanded by God to not lie, and scripture explains a true Christian cannot keep on doing evil. The Bible demands truth from a Christian and states the liar, or adulterer is a big fat fake.

“Everyone who sins is breaking God’s law, for all sin is contrary to the law of God. And you know that Jesus came to take away our sins, and there is no sin in him. Anyone who continues to live in him will not sin. But anyone who keeps on sinning does not know him or understand who he is.”

The next consensus of many today is that somehow Christians would cram their faith down the nation’s throat and punish people for not going to church or some other stupid fear. Yeah that’s what the Christian presidents did in the past, like George Washington, Adams, and Jefferson. NOT!

Only Christians fought for the rights of all men and demanded that everyone has the right to free speech, including those who disagree with them, and the free pursuit of happiness including owning their own land, creating their own business, and owning their own gun for self protection against criminals.

But, today the anti-Christian, anti-God movement hates that anyone dare disagree with them and find ways to silence and push Christians out of the mainstream of culture, politics, and education. They carefully have erased history and lie to gain control of the nation. According to them, we must disarm and trust liars without character, rely upon government for everything instead of God, and blindly trust them to train our children in what is right and wrong through the government controlled schools.

Like a false god, they want government  to tell us what is true and false, tell us what is moral and immoral, and give us the rights they think we should have. No wonder all you hear in the media is the drone of the robots trying to erase the Constitution of the United States of America, one small piece at a time.

To them, that old document has the smell of stupidity in it, from old idiots that believed in God the Creator, the Bible as universal truth, and Jesus as the only true religion. Of course they hate the Constitution it reeks with the divine all over it.

But the atheists demand we came from sea slim, over billions of years, by accident. Their superior knowledge of evolution, no moral rules, and might makes right proves the Christians are dumb sheep who bleat mindless sounds and brainlessly follow their charlatan pastors. But their great wisdom gives them the right to deceive and manipulate the nation and force the idiots into their modern Utopian society of slavery. And so we will see the continued misuse of power in America as they bravely push every Christian down the road to oppression.

The children of the devil believe we will comply to their government controlled health care that makes us give up our faith and conscience and allow babies to be murdered through drugs and abortion. And we will pay for it with our taxes and insurance premiums because freedom of religion does not matter, we are stupid in their eyes.

They think our God is weak and cannot protect us, so they will defeat and control us. Will we quietly gather in our closets and buildings and talk about God among ourselves, because we can’t openly broadcast it on public airwaves or in government schools? They control the media, at least most of it, and they don’t believe in freedom of speech, unless we agree with them.

Will we continue to sacrifice our children to the government machine of propaganda because we won’t offend the teachers, or even stand against false science that is crammed down our kids throats everyday in school?  If we do, our children will rise up and join them, because we are too lazy to dare and give all the real and complete answers to our own children.

If so, indifference, our true sin will have its final way with us, and unlike our forefathers, lies, injustice, and the new un-American way will rule the land. But no one will notice the change because we are so focused on our jobs, families, and having fun on the weekends that we have lost all sense of God’s ways.

Did you know 35-65 million Christians refuse to even vote today, yet each election has been determined by around 2 million votes or less? Our future is dark because so many Christians refuse to even take their responsibility to vote for righteous and just leaders. “Ye are the salt of the earth: but if the salt have lost his savour, wherewith shall it be salted? it is thenceforth good for nothing, but to be cast out, and to be trodden under foot of men.” [Matthew 5:13]

For evil to prevail all it takes is indifference “to be trodden under foot of men.”

But, there will be a remnant, a small band of true believers, who will dare to be different. True believers who will not stop practicing true religion. They will “get rid of all the filth and evil” in their lives and make the Bible their most prized possession. It’s every word will be their guide, they will obey His commands, and will be blessed by the LIVING and ALMIGHTY GOD. 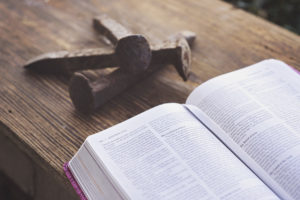 Their hearts divinely influenced by God will bubble inside until they lose their fears and find words of truth to speak to the unbelieving world. With new boldness their tongues controlled by the Holy Spirit they will speak UP and tell the truth to their children, families and neighbors.

In spite of a bankrupt government who will choose to neglect some children, widows and elderly, these saints will practice true religion somehow. They will do what the saints have always done since the atrocities of Rome and its neglect of the poor and needy, they will be Jesus’ hands and continue “caring for orphans and widows in their distress and refusing to let the world corrupt” them.

They will not be trodden down, but like the saints in the first century they will overcome the government oppression, cultural hatred, and spiritual darkness. They will not be quiet, but boldly proclaim the truth. They will practice true religion no matter how many people try to stop them.

How about you Virginia, we have a Savior who is almighty, are you in?