The desperate plight of man is his evil heart. We all need God’s forgiveness and we need to be rescued (saved) from the bondage of our evil heart. The only hope of true and complete change is for our evil heart to be removed and replaced with a good heart. But this is purely a spiritual thing. Who can change wicked people? Who can save us? Only Jesus! There is no other person but Jesus because he paid our debt.

What is the gospel?

God promised through the prophet Ezekiel that He would one day alter people’s lives by literally removing their evil heart and replacing it with a new good heart. This began to be fulfilled through Jesus when he died in our place on the Roman cross of capital punishment, was buried, and resurrected three days later. Justice was served and we were offered forgiveness. Then God fulfilled His promise to Christians on Pentecost which you can read about in Acts chapter two. He gives all believers a new heart and new spirit.

God is spirit and that means He is invisible to our eyes. His true nature is like the sun and we would die in His presence. But He created us with a spirit so that man can connect with Him. As our graphic shows, since we cannot see Him we can only see the results of His presence. His righteous character and supernatural presence are revealed in “everyone who is born of the Spirit.”

So what is grace and how does God use supernatural grace to bring people to salvation?

We find in Paul’s letter to the church in Ephesus, Greece, “God saved you by his grace when you believed. And you can’t take credit for this; it is a gift from God.” Ephesians 2:8 (NLT)

Most skim past these words. But we need to stop and understand what grace is. We find in Strong’s Talking Greek & Hebrew Dictionary the definition of grace.

GRACE: graciousness (as gratifying), of manner or act (abstract or concrete; literal, figurative or spiritual; especially the divine influence upon the heart, and its reflection in the life;

This may not be what you thought. According to this grace is God’s hand influencing our hearts like the wind leaving His mark in our lives. No one can decide to follow Jesus. No one can save themselves. No one can change their heart. And that is because Jesus is clear, “…no one can come to me unless the Father who sent me draws them to me, and at the last day I will raise them up.” John 6:44 (NLT)

God uses grace, the divine influence upon the evil heart to draw the sinner to Jesus. Here is how He does it.

The Holy Spirit presses God’s Law upon the conscience until it produces guilt.

This unmerited grace of conviction is a free gift of God. With the power of the Holy Spirit (Acts 1:8) a Christian shares the gospel with someone and God thrusts the Law past their mind, will, and emotions and stabs the Word into the conscience, exposing “the very thoughts and motives of a man’s heart.” Why does God do this? The reason is simple, God is working to bring that person to repentance. Man must respond to the gospel, but because of their evil heart, they cannot repent without the grace of God.

Here is what I mean. According to the Lord Jesus, the people who see they have no good inside them and realize their horrible sin are the only people promised heaven.

The type of “poor” He speaks of are those who know their evil hearts have absolutely no good in them at all. But the problem is to gain this realization people must be convinced by the Holy Spirit to see how sinful they really are.

Let’s look at the first sermon the apostle Peter gave in Acts 2 to understand this. You need to see what God does to draw sinners to Jesus, and how the Law of God probes the guilty conscience.

22  “People of Israel, listen! God publicly endorsed Jesus the Nazarene by doing powerful miracles, wonders, and signs through him, as you well know.

23  But God knew what would happen, and his prearranged plan was carried out when Jesus was betrayed. With the help of lawless Gentiles, you nailed him to a cross and killed him. 24  But God released him from the horrors of death and raised him back to life, for death could not keep him in its grip.

As Peter shares the good news of the death, burial, and resurrection of Jesus, he also uses the sixth commandment and points out they are murderers. You see, the Jews rejected their Messiah and murdered him. Peter is not trying to convince them to accept Jesus, he is aiming at their conscience to bring them to repentance.

29  “Dear brothers, think about this! You can be sure that the patriarch David wasn’t referring to himself, for he died and was buried, and his tomb is still here among us.

30  But he was a prophet, and he knew God had promised with an oath that one of David’s own descendants would sit on his throne.

31  David was looking into the future and speaking of the Messiah’s resurrection. He was saying that God would not leave him among the dead or allow his body to rot in the grave.

Next, Peter repeats his words and stabs them again by saying, “whom you crucified.” And it is important to remember the words of Jeremiah the prophet while he spoke for the LORD, “Is not my Word like a fire?…and like a hammer that breaks the rock in pieces?” God cracked open many of the Jews’ stubborn hearts and they saw themselves as horrible sinners.

36  “So let everyone in Israel know for certain that God has made this Jesus, whom you crucified, to be both Lord and Messiah!”

37  Peter’s words pierced their hearts, and they said to him and to the other apostles, “Brothers, what should we do?”

As the book of Hebrews stated the Word of God, “exposes the thoughts and motives of a man’s heart”. Yes, the free gift of grace greatly influences the conscience. The Holy Spirit uses the Law of God like a hammer and powerfully pierces the conscience. So we see here Peter preached and suddenly 3000 people realized just how sinful they really were.

Remember the words “pierced their hearts” were used to describe what happened to the people moved by Peter’s words. To understand the Greek word meaning look at two other Bible translations of this statement.

Acts 2:37 (NCV) “When the people heard this, they felt guilty and asked Peter and the other apostles, ‘What shall we do?’”

You see the Holy Spirit was not finished with just making these sinners realize in their minds that they were evil. In Matthew 5:4 Jesus tells us the people who are grieved and sorrowful for seeing their sin are the ones God blesses with His eternal comfort. So He pressed them hard with His law until they felt guilty. God knows our evil hearts and only this grace will move us to actually be deeply grieved for our sin.

The Holy Spirit holds the guilt upon the conscience until it produces grief (sorrow).

If we look back deeply into the Greek word translated “pierced” we find “it properly denotes to pierce or penetrate with a needle, lancet, or sharp instrument; and then to pierce with grief, or acute pain of any kind.” – Barnes’ Notes on the New Testament.

So the next Bible translation of this statement helps us further understand why grief, sorrow or mourning is important and taught by Jesus. “Now, having heard this, they were stung to the heart with poignant sorrow.” Acts 2:37 (WuestNT) God blesses the people who deeply grieve over their evil hearts.


For the Holy Spirit to enter our spirit and give us a new heart the conscience must be pierced until we see our true sinful nature. We all must realize and confess our specific spiritual crimes like they did under Peter’s sermon. To receive salvation our hard heart must be broken.

As Paul explains, “Now we know that whatever the Law says, it speaks to those who are under the Law, so that [the murmurs and excuses of] every mouth may be hushed and all the world may be held accountable to God. For no person will be justified (made righteous, acquitted, and judged acceptable) in His sight by observing the works prescribed by the Law. For [the real function of] the Law is to make men recognize and be conscious of sin [not mere perception, but an acquaintance with sin which works toward repentance, faith, and holy character].“ Romans 3:19-20 (AMP)

And as God’s grace pierces the guilty conscience it produces godly sorrow. Deep grief is the normal response when a sinner actually sees their guilt.

As God’s Word says, “For godly sorrow produces repentance leading to salvation.” This grace affects the soul and frees the person to respond to God in humility instead of reacting to God from their evil heart. As the Word says, “But He gives us more and more grace (power of the Holy Spirit, to meet this evil tendency and all others fully). That is why He says, God sets Himself against the proud and haughty, but gives grace [continually] to the lowly (those who are humble enough to receive it).” James 4:6 (AMP)

The only way a person can be humbled to the place that allows the Holy Spirit to enter them and give them a new spirit and new heart is by this grace process. The sinner screams “I am a good person!” But the convicted sinner shuts their mouth, grieved over their horrible sin before their Creator, and surrenders to His control.

God’s process is GUILT… GRIEF… REPENTANCE. This is why Jesus taught from the start only the spiritually poverty-stricken get heaven, only the grief-stricken who mourn over their sin will God truly comfort, and only the meek will receive God’s eternal blessing of a new heart and spirit.

So when Jesus says God blesses the meek he is describing repentance.

God only blesses the broken sinner who fully surrenders to God and receives His forgiveness. No more resistance to the will of God. No more excuses for doing things their own way. Instead, they now humbly FOLLOW THEIR LORD JESUS!

And the blessings begin immediately on this earth, not just later when they get to heaven after death. Finally, as Jesus revealed, now they “…understand God’s word and produce a harvest of thirty, sixty, or even a hundred times as much as had been planted!” Matthew 13:23 (NLT)

The whole earth benefits from the harvest! 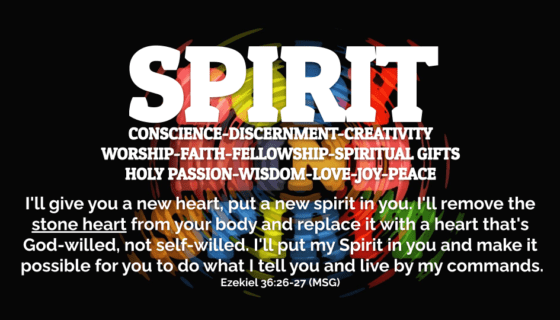